Corporate video production covers a wide range of purposes from corporate Communication, Training and Education, videotaping conferences and conventions, products and services, and sales. A popular type of corporate shoot is known as the “candids” or “happy-face” video, in which a multiple-day event is covered by a video crew, including speakers, break-out sessions, awards ceremonies and local recreational activities in which the conventioneers participate. An on-site editor then creates a short video presentation that is shown before the close of the convention. Many associations take advantage of the convention venue to gather interviews of their principals, setting up a green screen or other type of background in a secluded room. 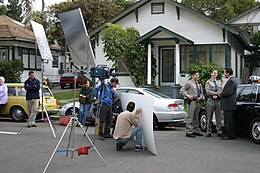 Video production can be used at sporting, school, stage, wedding, church, and similar events to provide recordings of the events. Event video productions range in distribution from a wedding video that is custom made for a bride and groom and their immediate family and friends, to a dance recital where dozens to hundreds of videos are sold to individual dancers. Event video production can also be used to broadcast events live to viewers at home such as a press conference or concert. Video of live events can be sent by microwave or a satellite truck from the event location to a television studio in order to be broadcast.[2]

Explainer videos incorporate animation as the primary visual element. There are two main types of explainer videos: Whiteboard and Cartoon. Both types are used to convey messages that are technical in nature. By using the explainer type of videos, the viewer has a better understanding of the concept of the message being presented.

Marketing videos are used to promote an organization or product and create awareness among consumers. Marketing video production ranges from television advertisements to internet commercials and viral videos.

Real Estate video productions consists of shooting footage of properties and editing them into short videos; the final videos could include footage, graphics, titles, animations, and voice over.

Video production for distance education is the process of capturing, editing, and presenting educational material specifically for use in on-line education. Teachers integrate best practice teaching techniques to create scripts, organize content, capture video footage, edit footage using computer based video editing software to deliver final educational material over the Internet. It differs from other types of video production in three ways: 1. It augments traditional teaching tools used in on-line educational programs. 2. It may incorporate motion video with sound, computer animations, stills, and other digital media. 3. Capture of content may include use of cell phone integrated cameras and extend to commercial high-definition Broadcast quality cameras. The primary purpose of using video in distance education is to improve understanding and comprehension in a synchronous or asynchronous manner.[3]

Webcasting is also being used in education for distance learning projects. One innovative use was the DiveLive[4] programs. In the fall of 2000 Rick Allen’s Nautilus Productions co-produced with Bill Lovin of Marine Grafics a groundbreaking, week long live internet broadcast known as QAR DiveLive from the Blackbeard wreck site.[5] For the first time ever, live video and audio was broadcast from an underwater archaeological site to the World Wide Web. Students were able to watch the underwater archaeology in real time and ask questions of the scientists exploring theshipwreck. The twice-daily live distance learning programs reached an estimated 1600 students from as far away as Canada during the five days of broadcasting. In October of 2001 Allen and Lovin again co-produced QAR DiveLive 2001. This time the interactive webcasts from the seafloor and conservation laboratories of the Queen Anne’s Revenge Shipwreck Project reached over 3600 students and another 2700 remote viewers from fifteen states and 2 countries during the five days of broadcasts.